The approach taken in this section is based on the article Introducing the Future Circular Collider (FCC) into Secondary Classrooms.

As we have also seen in the explanations on the LHC, FCC is not completely circular. It consists of straight parts inserted into arcs, in which the interaction points are installed (with detectors which register the events), particle injection zones (at high velocities, reached through previous accelerators), and extraction zones in which particle bunches -bunches- are retrieved when they do not present the necessary conditions for the required number of collisions that should occur at the interaction zones. 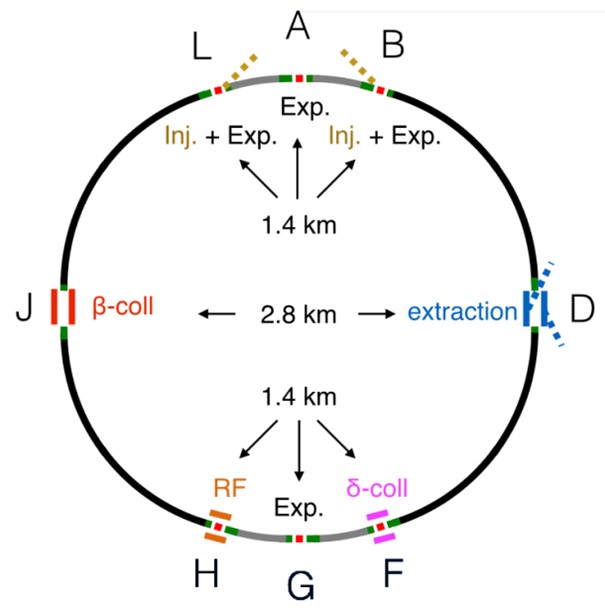 The “Bending radius (ρ)” is a defining parameter of a circular accelerator. It represents the radius of the theoretical circumference that the accelerator’s main arcs form. This parameter can be obtained approximately using simple Dynamics expressions. The centripetal force which curves the charged particles is the Lorentz Force:

Taking into account that these particles travel practically at the speed of light (v ≈ c), we get to:

The numerator of the first term is the final energy (E) of the charged particle which travels through the accelerator. This means that:

Both “q” and “c” are constants, which leads us to an important conclusion: the maximum energy that a charged particle can reach in a circular accelerator depends directly on the applied dipolar magnetic field (B) and the “Bending radius” (ρ):

From expression (1) we have that:

Using the values of  “q” and “c” together with the appropriate conversion factors, we can obtain the value of ρ(km) from E (TeV) and B (T):

The marked goal for the FFC is obtaining 100 TeV energy at the centre of mass in a proton-proton collision (50 TeV per proton) assuming a 16 T dipolar magnetic field. This is already possible with technology which use Nb3Sn superconductor cables (*Benedikt and Zimmermann, 2018).

From this value we can deduce that the main arcs of the FCC form a curved zone with:

We should also consider the straight parts, which we referred to at the begging of this section, and the rest of the minor curved zones needed to connect the straight zones. The base dimension of the research implies an approximate 90 km long circular accelerator.

This value can be compared to the approximate 26,7 km of the current LHC. That is, we multiply the energy by 7, increasing the length by less than 3.5 times.