Accelerators works with charged particles that are accelerated to speeds close to the speed of light. By letting very fast and energetic particles collide in the accelerators, the scientists can extract information about matters smallest components. In such collisions are new particles created, which will provide information about the secrets of particle physics. In some sense the big accelerators can be said to be today's "super microscopes".

An ordinary CRT television set is a simple form of particle accelerator (electrons).

About linear versus collider a short discussion can be found here...

Depending on the energy and the particle being accelerated, circular accelerators used in Particles Physics suffer a disadvantage in that the particles emit synchrotron radiation.

It is importante to note that a circular accelerator is not completely circular. It consists of straight parts inserted into arcs, in which the interaction points are installed (with detectors which register the events), particle injection zones (at high velocities, reached through previous accelerators), and extraction zones in which particle bunches -bunches- are retrieved when they do not present the necessary conditions for the required number of collisions that should occur at the interaction zones.

On the other hand, in these straight parts the charged particle beams do not generate synchrotron radiation (which is produced in the curved parts), thus avoiding damage to detectors, collimators, injection and extraction devices, radio-frequency cavities etc.

The LHC, PSB, PS and SPS that form the CERN accelerator chain are all circular accelerators. So is the large accelerator of the future FCC.

For this reason, linear accelerators are considered for electrons/positrons (CLIC or ILC projects) and circular accelerators for protons/antiprotons (such as Fermilab's Tevatron, the LHC or the FCC).

Just how do cosmic rays reach such high energies? Where are the natural accelerators? The lowest energy cosmic rays arrive from the Sun in a stream of charged particles known as the solar wind, but pinning down the origin of the higher-energy particles is made difficult as they twist and turn in the magnetic fields of interstellar space.

Clues have come through studying high-energy gamma rays from outer space. These are far fewer than the charged cosmic rays, but being electrically neutral they are not influenced by magnetic fields. They generate showers of secondary particles that can be detected on Earth and that point back towards the point of origin of the gamma rays. Sources of the highest energy gamma rays in our own galaxy, the Milky Way, include the remnants of supernovae, such as the famous Crab Nebula; the shock waves from these stellar explosions have long been proposed as possible natural accelerators. Other sources of ultra-high-energy gamma rays lie in other galaxies, where exotic objects such as supermassive black holes may drive the acceleration. There is also evidence that the highest energy charged cosmic rays also have similar origins in other galaxies.

The following event in 2021 serves as an example.

On 8 August, 2021, the recurrent Nova RS Ophiuchi exploded. The explosion was real-time followed by the H.E.S.S. gamma-ray telescopes in Namibia.

The observations revealed a cosmic particle accelerator in unprecedented detail.

The Nova RS Ophiuchi comprise a white dwarf in a binary system with a large star from where it gathers continuously new material. When the gathered material goes over a critical level, thermonuclear explosions occur on the surface of the white dwarf. RS Ophiuchi repeatedly show these explosions on its surface every 15 to 20 years. The nova creates a shock wave that ploughs through the surrounding medium, pulling particles with it and accelerating them to extreme energies. The H.E.S.S. telescopes could real-time follow the course of the explosion and the accompanying shock wave in the high energy gamma-ray regime. 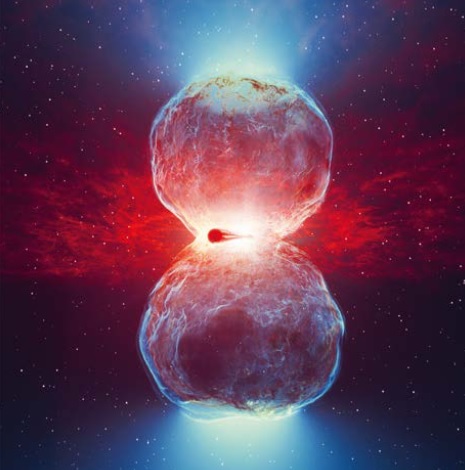 Artist’s impression of the RS Ophiuchi Nova outburst. The fast shockwaves form an hourglass shape as they expand, in which gamma rays are produced (Image: DESY/H.E.S.S., Science communication Lab).