Lead ions are produced from a highly purified lead sample heated to a temperature of about 550°C. The lead vapour is ionized by an electron current. Many different charge states are produced with a maximum around Pb27+. These ions are selected and accelerated to 4.2 MeV/u (energy per nucleon) before passing through a carbon foil, which strips most of them to Pb54+. The Pb54+ beam is accumulated, then accelerated to 72 MeV/u in the Low Energy Ion Ring (LEIR), which transfers them to the PS. The PS accelerates the beam to 5.9 GeV/u and sends it to the SPS after first passing it through a second foil where it is fully stripped to Pb82+.

The detector consists of two main components: the central part composed of detectors dedicated to the study of hadronic signals and electrons, and the forward muon spectrometerdedicated to the study of quarkonia behaviour in dense matter.
The central part is embedded in a large solenoid magnet with a weak field (full current of 6000 amps and magnetic field of 670 millitesla). The innermost part of the detector is the tracking system, which consists of the inner tracking system (ITS) and the outer tracking system (TPC).

TPC is the principal component of ALICE and it's a time projection chamber. A cylindrical device filled with gas and incorporating uniform electric and magnetic fields, a TPC is ideal for separating, tracking, and identifying thousands of charged particles in a dense environment — such as the thousands of particles produced in an energetic heavy-nuclei collision. It is the main detector in many high-energy physics experiments.

At each Long Shutdown (LS) the various accelerators, detectors and other devices undergo major maintenance, consolidation and upgrade operations.

ALICE had some of the most major experimental upgrades during the long shutdown (LS2). These upgrades will not only prepare ALICE for LHC Run 3, but also for the planned HL-LHC.

A major renovation was the replacement of ALICE’s TPC (Time-projection chamber). The new ALICE TPC, which is based on nine years’ worth of R&D, is projected to accumulate 50 times more heavy-ion collision data in the upcoming LHC Run 3 than in Runs 1 and 2 combined.

ALICE scientists also designed, built and installed a new Inner Tracking System, a detector that sits close to the point where particles collide. ALICE’s inner tracking system is made from silicon wafers, the same type of sensor material used to make digital cameras. The new detector will significantly increase the resolution of the “pictures” ALICE takes of particle collisions. It has a surface area of 10 square meters, making it the largest pixel detector ever built.

[This last part ist based on What’s new for LHC Run 3? By Sarah Charley. Symmetry (A joint Fermilab/SLAC publication)]

The image at the bottom of the DETECTORS Section shows some of those performed on the larger detectors during LS2 (2019-2022). 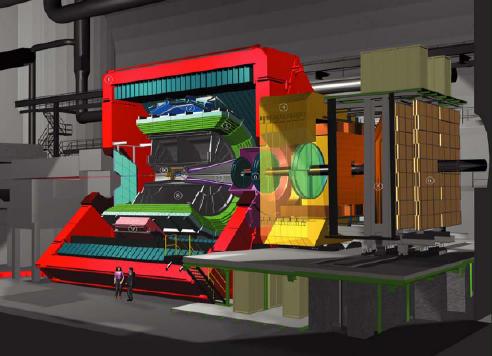