2.- The symbol is read from left to right. The left hand side of the symbol shows the nature of the particle before the interaction and the right hand side shows the nature of the particle after the interaction. (Note: it is also common to find Feynman diagrams using the convention that time flows from the bottom of the diagram to the top. This is just a matter of taste but the left to right convention is more commonly used).

A couple of events well known (particle-antiparticle creation an annhilation):

Let's see the Feynman diagram for a β- decay: 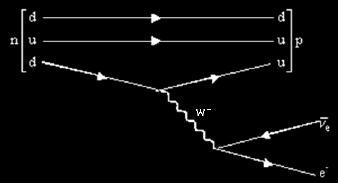