Supersymmetry (SUSY) is a proposed property of the universe. It is one of the best motivated extensions of the Standard Model, so the study of SUSY is a primary goal of the LHC.

Supersymmetry requires every type of particle to have an associated supersymmetric particle, called its superpartner. The superpartner is a heavy replica of a particle, with one other significant difference. All particles are classed as either fermions or bosons. A particle belonging to one class has a superpartner in the other, thereby "balancing the books" and making nature more symmetric. For example, the superpartner of an electron (a fermion) is called a selectron (a boson). 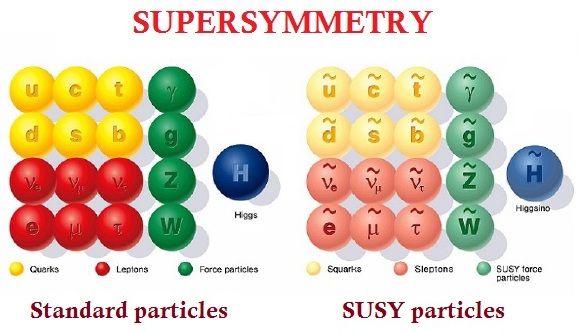 This symmetry, which may have existed in the very early, high-energy universe, could be detectable with the ATLAS and CMS experiments. If the LHC makes supersymmetric particles, their lifetimes will be fleeting. But physicists can deduce their presence from the more-stable decay products. In at least one case, such SUSY clues could also be evidence for dark matter.
The lightest of these sparticles may be a major part of the cosmic dark matter that we know exists but cannot yet describe or detect.
Grand Unification, grand unified theory, (GUT) predicts that at extremely high energies (above 1016 GeV), the electromagnetic, weak nuclear, and strong nuclear forces are fused into a single unified field.

Supersymmetry, specifically a version called the minimal supersymmetric model, achieves the grand unification  more naturally, with far less fine-tuning. The theory predicts five Higgs bosons of different masses, which makes the process by which the universe gets its mass more complicated than that laid out by the standard model with its single Higgs. 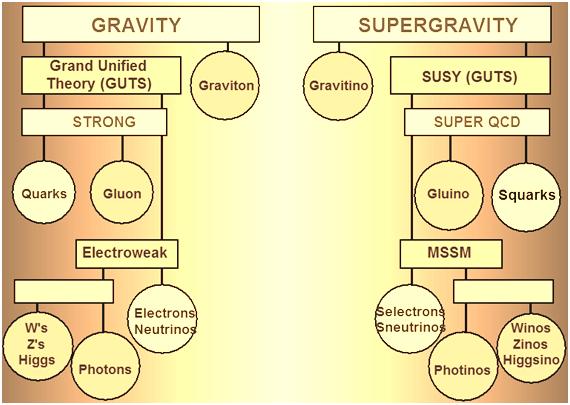