We characterise the position of the proton in this transverse motion by two things: Position or displacement from central path (x), and angle with respect to central path (x’).

These transverse oscillations are called Betatron Oscillations, and they exist in both horizontal and vertical planes.

In first aproximation, we can express these transverse oscillations as varying in time:

Where K is de force constant taken here as a constant independent of s .

This is the equation of a SHM with solutions:

The longitudinal speed of the particle is constant :  v = s/t

Therefore we can rewrite the solutions in function of s:

With many x,x’ “pairs” measured over many turns we can make a phase space plot: x vs x’. 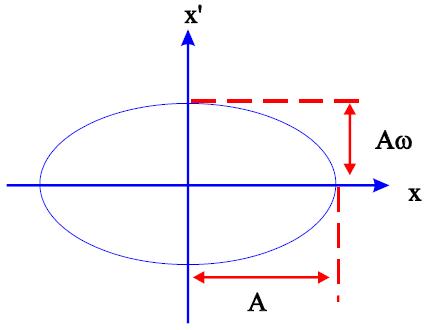 In reality our beam will consist of many particles each with different amplitudes A and different phases φ, so on any single turn we will see (if we could distinguish and measure each individual particle) many points on the above plot each corresponding to a particular particle.

So we have to consider K as function of  s.

We can write a general equation for transverse motion:

where K(s) is the focusing strength which is now a function of “s” and is no longer constant. This equation is called Hills equation.

To resolve it we introduce three parameters (ε,  β(s) and ψ(s) ) which represent the behavior of the beam in function of the initial conditions (injection chain) and the focusing strength (quadrupoles).

ε = transversal emmitance,  which is constant and depends on the initial conditions

β(s) = the amplitude modulation due to the changing focusing strength

ψ(s) = the phase advance, which also depends on focusing strength

With these parameters we can take a solution of the form:

φ is the  mathematical phase which depends on the initial conditions.

The rate of change of phase ψ(s) of the betatron oscillation around ring is proportional to the inverse of the particle’s oscillation amplitude. That is:   dψ(s)/ds ~1/β(s)  (2)

Next figure shows a plot in phase space of these x and x’ values over many turns for a single particle observed at one position, s, around the accelerator being β constant in this point. 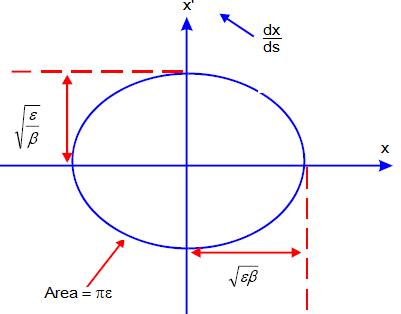 The transverse emittance, ε, has units of length (or length x angle), and is determined solely by initial conditions. However, as we move around the ring, β(s) varies and alters the shape of the ellipse, but the area of the ellipse remains constant all around the accelerator.

In fact to be rigorous we should define the emittance slightly differently. If we were able to observe all the particles at single position on one turn and measure both their position and angle, we would see a large number of points on our phase space plot, each corresponding to a pair of x,x’ values for each particle. 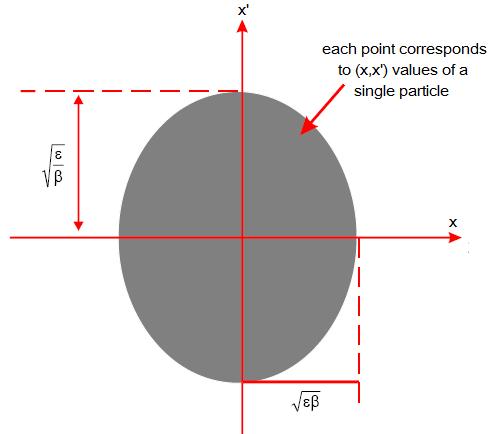 The Beam dimension is:

We can get the bunch cross section by doing the square of the Beam dimension:

By comparing the two last equations we can express  β in terms of σ and ε  :

Other important kind of movement is the so called longitudinal oscillation.

The RF Cavities generate a longitudinal oscillanting voltage, which is applied across an isolated gap in the vacuum chamber, so that the particle sees an accelerating voltage at the gap, and the voltage then cancels out as the particle goes around the rest of the machine.

You can follow a more complete explanation about this type of movement here...