Luminosity (L) is one of the most important parameters of an accelerator.

L can be obtained semiqualitatively from:

- N2 : number of protons, because each particle in a bunch might collide with anyone from the bunch approaching head on.

- Seff :  section effective of collision that depends on the cross section of the bunch(“effective” because the beam profile doesn’t have a sharp edge); the formula for this is given by : Seff =4·π·σ2 with σ=16 microns or 16·10-4 cm (transversal size of the bunch at Interaction Point).

And considering different number of protons per crossing bunches, and x and y components for σ separately:

We can also express the Luminosity in terms of ε (emittance) and βeta (amplitude function)as:

Since in the LHC the value of L is 100 times greater than that of LEP or Tevatron makes CERN a leader in this field.

After the LHC have operated for some years at nominal parameters, it is necessary to upgrade it for significantly higher luminosity. The most direct way of increasing luminosity is to focus the beam more tightly at the collision point (reduce Seff , or more especifically the so-called β* parameter) which calls for a redesign of the machine optics in the Interaction Regions (IR) and a replacement of the final-focusing quadrupole magnets. The time scale for replacing IR magnets is in part determined by the lifetime of the present magnets under high radiation doses.

The the injector chain upgrade took place in 2022 with LINAC4.

Other options can be considered to raise the LHC luminosity, such as increasing the number of bunches or increasing the number of protons per bunch. However, there are limitations on how far these parameters can be pushed, such as the beam-beam limit and the long-range beam-beam interactions, the electron cloud effects, the implication on collimations and machine protection, pile up of events in the experiments and so on.

All these actions are essentially performed during long shutdowns (LS). See for example LS2.

To see the relation between L and transverse emittance, ε , and the amplitude function, β, go to Beta and Emittance Section.

The integral of the delivered luminosity over time is called integrated luminosity. It is a measurement of the collected data size, and it is an important value to characterize the performance of an accelerator.

The next graph shows the integrated luminosity delivered to the ATLAS and CMS experiments during different LHC runs. The 2018 run produced 65 inverse femtobarns of data, which is 16 points more than in 2017. (Image: CERN) 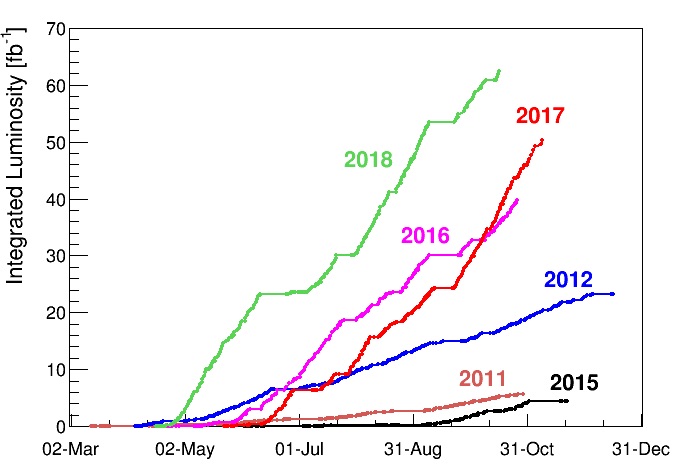 The accumulated integrated luminosity in Runs 1 and 2 was 196 1fb-1 , and is expected to reach 500 fb-1 at the end of Run 3.
More information about LHC Luminosity here.