The so-called “Beam Lifetime” (ζ) is the time interval after which the intensity of the beam has reached 1/e of its initial value (e is Euler’s number).

First we consider the collisions among protons in the interaction points. The total proton-proton cross section at 7 TeV is approximately 110 mbarns (milibarns) 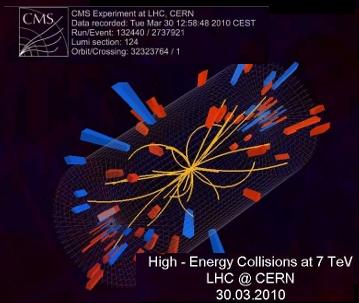 The total collision rate at nominal luminosity is:

We can consider these collisions as a proton “decay” process with a probability, λ :

This value represents the probability that one proton collide with an opposing proton per second.

So, the variation of the number of protons is given by:

So, by considering only protons collisions in the interactions point the Beam Lifetime would be over 80 hours.

A second important process which decreases the number of protons is the the inelastic scattering produced by proton-gas collisions (see Ideal Gases Equation section). Elastic interactions are not considered because in this process the kinetic energy of the proton is conserved, and magnetic multipoles act to correct these deviations by focussing the bunch.

The main gases are H2, CH4, CO, CO2, H2O and nobles gases, but we will consider that all molecules are H2 (In fact, for calculation the rest of molecules "are converted into" H2equivalent, by introducing corrector parameters). 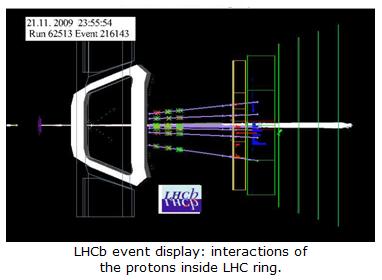 For this calculation, we consider the 2.45-km-long LHC arcs, where the gas density (ρm) has significant importance ( see Ideal Gases Equation section).

Then, for a single bunch (Np ~ 1011 protons) circulating, the number (Nlap) of bunch-gas interactions per lap over a distance d  is:

Since bunches do 11245 laps per second (f ), the rate of bunch-gas interactions (Rint) is:

So we have around 3·105 lost protons per bunch in a second when beams begin to circulate around the LHC.

We can consider again this situation as a proton “decay” process with a probability, λ :

This value represents the probability that any proton collide against any gas molecule per second.

So, taking only into account protons-gas collisions the Beam Lifetime would be over 110 hours.

By considering the both two process together, the Beam Life time will be:

Other mechanisms such as limited efficiency of the correction and focalization systems,Coulomb scattering of protons travelling together (Touschek effect included), or travelling in differents bunches when crossing in interaction points, or operating errors, also contribute in decreasing the Beam Lifetime.

Due to this, finally the Beam Lifetime for the LHC is about 10 hours.