The phenomenon of superconductivity was first observed in 1912 in the laboratory of Heike Kamerlingh Onnes, at the University of Leiden (Holland). At low temperatures certain materials (about 800 superconducting compounds have been tabulated up to date) suddenly lose their resistance to the flow of electricity on cooling. The phenomenon remained a laboratory curiosity until 1954 when G. B. Yntema at the University of Illinois, made the first successful superconducting magnet. The slow progress can be partially attributed to the difficulty in obtaining the extremely low temperatures required, and the lack of understanding of how to create electrically and thermally stable wires from superconductors. But the primary limitation was that the superconducting phenomenon was not only limited to low temperatures but also to a restricted range of electrical current density and magnetic field and that the range of these properties was particularly limited in early superconductors.

The next figure shows the dependence between the magnetic field and the temperature (Hc and Tc are specific for each material): 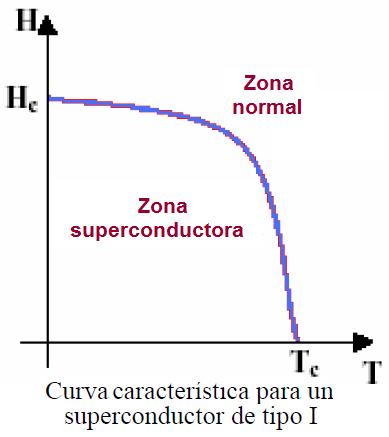 The early superconductors, such as Pb, In and Hg are classified as Type I superconductors, these are superconductors in which magnetic flux is excluded (Meissner Effect) from their bulk and the critical current density is limited to a surface layer of approximately one tenth of a micron. 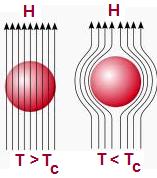 The maximum fields in which these superconductors can operate are usually less that 0.1 T (similar to the flux-density between the poles of a horse-shoe permanent magnet). These limitations make Type I superconductors impractical for wire and cable applications. 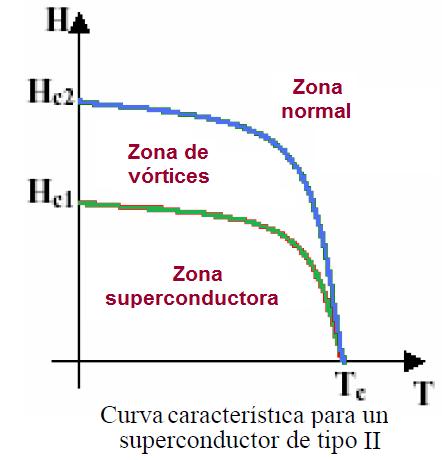 The 1700 large magnets and the 8000 corrector magnets of the LHC are wound with Nb-Ti.

Other Type-II examples are the cuprate-perovskite ceramic materials which have achieved the highest temperatures to reach the superconducting state. These include compounds of LaBaCuO and YBaCuO, which is famous as the first material to achieve superconductivity above the boiling point of liquid nitrogen. One of the main problems with these materials is that they are brittle due to their ceramic nature.

In the most widely used technical superconductors, Nb-Ti and Nb3Sn, the upper critical fieldsare 13 T and 27 T respectively and current densities > 105 A/cm² can be carried (compared to ~ 103 A/cm² for domestic Cu wire).

The critical temperatures for Nb-Ti and Nb3Sn are 10 K and 18 K respectively. Liquid Heprovides cooling to 4.2 K at atmospheric pressure and as low as 1.8 K at reduced pressure. 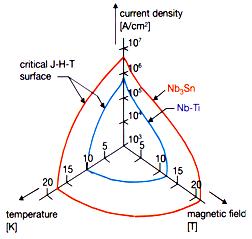 (Taken from Lyndon Evans (2009). THE LARGE HADRON COLLIDER: A MARVEL OF TECHNOLOGY. CERN AND EPFL PRESS)

Superconductors must be formed into composite wires in order for them to be used in high current applications and these wires may also be cabled.

The most common design for Nb-Ti magnets is the Rutherford cable, which consists of a fully transposed, flat cable. Using this approach, high aspect ratio cables can be produced with as many as 46 strands. For electromagnetic reasons, the composite wires are twisted so that the filaments look like a rope.